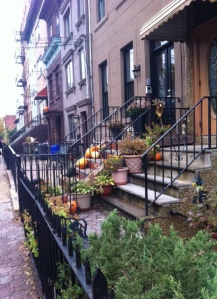 We were up early, had our breakfast and headed to the ferry that would take us to Hoboken.

I must tell you that my friends and I are all Frank Sinatra fans.
We are baby boomers who grew up listening to his music.
We have always wanted to go to the city he was born and
grew up in, and now we were going.

After a short ferry ride across the river we were walking the
streets of this wonderful city. I was pleasantly surprised at
how nice and quaint Hoboken is. Here we are in a regular
neighborhood with bustling Manhattan right there overlooking
this city.

We first headed to Carlos Bakery, The Cake Boss. It was still
early so there were no crowds. It’s a small shop with many
enticing baked goods calling our names. We decided to come
back after our Frank Sinatra pilgrimage. I know I know pretty
crazy huh!!

With map in hand, we walked the back streets passing wonderful
houses with all their stoops decorated for Halloween along with
beautiful flower pots overflowing the stoops.

We found the birthplace of Frank at 415 Monroe Street. The
home is no longer there, but there is an Arch where his home
had been. Also, a plaque on the sidewalk, a tribute to him.
We then found his childhood home at 841 Garden Street where
he lived as a young boy and as a teenager.
We saw his grammar school, high school and the Brownstone
his parents bought after he started his career.

I think we saw almost everything that we wanted to see including
where he would perform in the early days. Pretty crazy huh!

We ended up having a great lunch at Leo’s Grandezvous, home
of the jukebox with the largest selection of Frank’s hits.
I had a special pizza that they are known for with a glass of
red wine. Good food, good music!

After lunch, we were told to contact a man by the name of Nick who
has lived in this city for many many years. We had no problem
finding him. When we told him why we were there, on this
Frank Sinatra pilgrimage, he just chuckled but was more than happy
to share stories with us about those days. He told us a lot about
the history of the city and even took us into a tiny small Chapel
called St. Fabiola. It is only open for a service once a year at
Christmas. It is over a 100 years old.

After leaving Nick we headed back to Carlos Bakery for a little
treat. We took our sweets over to the Frank Sinatra Park and
sat and enjoyed not only the desert but the view. Wow, what
a fantastic view that was. It was stunning with the skyline of
Manhattan right there. I only wished it was dark so the lights
of the city would be on. What a sight that would be.

I must say, I was very impressed with this city. It is a place I surely
would return to.

We took the Ferry back into the city passing the Statue of Liberty.
As many times as I have seen it, it always makes me so proud to
live in this Country as an American.

After a short needed nap, we decided to have drinks at Grand
Central Station at the Campbell Apartment on the second floor.
John W. Campbell, 1920’s tycoon used this beautiful room as his
private office and Salon.

It was a perfect ending to a great day and visit to New York City.
We were leaving the next day and although there was so much
more we wanted to see and do, we knew we would return. 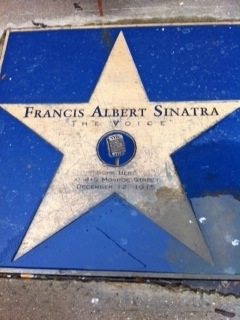