We were up early, had breakfast and off to Rockport. It would be
a full day of driving, around 313 miles. We were now on Highway 1
heading south. It was a little bit of backtracking but we wanted to
hit some towns we missed on the way north.

We arrived in Rockport around 5:30, checked into the Rockport
Inn just outside the town. We had dinner at the Blue Lobster
Grill in town facing the harbor and the famous red barn that
Rockport is known for.

I had been to this town twice before and always thought it was
a picture postcard. Rockport is filled with large estates, summer
homes and a small fishing village. It is only 40 miles from Boston
at the tip of Cape Ann peninsula. It’s rocky beaches and seaside
parks attract tourists from the Boston area and Rhode Island.

Many movies have been filmed here. The Proposal with Sandra
Bullock in 2009, Mermaids with Cher in 1990, Edge of Darkness
with Mel Gibson in 2010 and Stuck on you with Matt Damon in 2003.
Of course it is also well-known for the famous Motif 1, which is the
famous red barn in all the Rockport advertising.

We finished the evening off sitting on a bench eating an ice cream
cone and people watching. This is the life!! 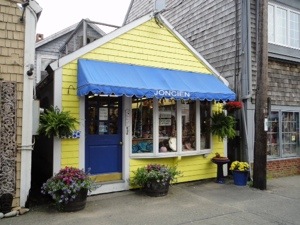