There are two things Detroit is known for, the Auto Industry,
and the music of Motown.

Motown was started in the early 1960’s by Berry Gordy, a
young auto plant worker, who developed a love for music and
had a dream of writing and producing a special sound. With
his vision, and a loan of $800.00 from his family, Berry
Gordy started the Motown sound, and the rest is history.

In 1959 Berry Gordy purchased this former photography studio
at 2648 W. Grand Blvd in Detroit, Mi., and nicknamed it
Hitsville, USA. The music produced in this small studio,
opened 24 hours a day, would produce a sound that would
change a racially divided country and segregated society
and touch people of all ages and races.

It was Smoky Robinson that said it best. “Into the 60’s,
I was still not of a frame of mind that we were not only
making music, we were making history. But I did recognize
the impact because acts were going all over the world at
that time. I recognized the bridge that we crossed, the
racial problems and the barriers that we broke down with
music. I recognized that, because I lived it. I would
come to the South in the early days of Motown and the
audiences would be segregated. then they started to get
The Motown music and we would go back and the audiences
were integrated and the kids were dancing together and
holding hands”. 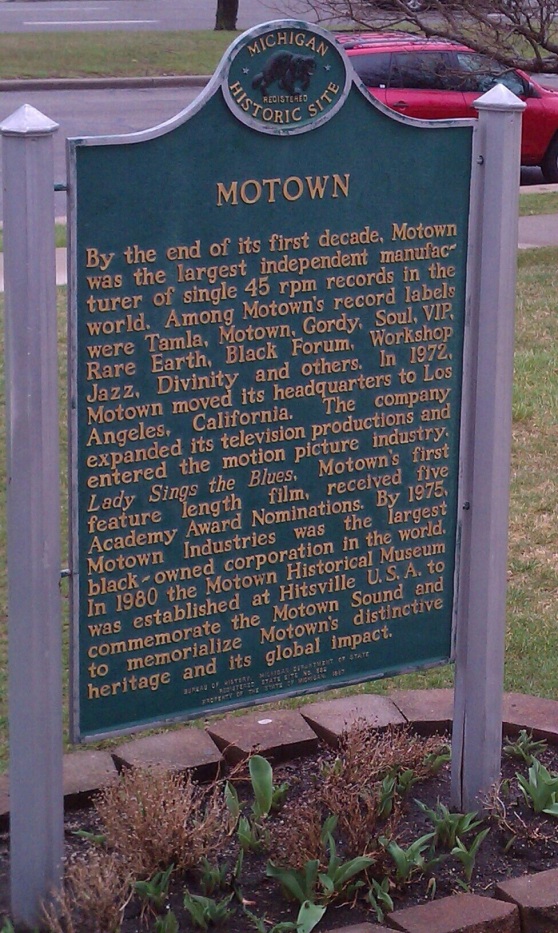 Hitsville, USA would become home to the most popular
recording acts in the world, Marvin Gaye, Stevie Wonder,
The Temptations, The Supremes, Smokey Robinson and the
Miracles, The Four Tops, The Contours, The Spinners,
The Marvelettes, and many more. Detroit was already
on its way to producing great sounds when Motown came
on the scene, making Detroit a powerhouse of great
music. Many of these performers, including Aretha
Franklin have been inducted in the Rock and Roll Hall.

It is a joy to tour this museum. Every year there are
tens of thousands of visitors that came to Hitsville,
USA. The museum was founded by Esther Gordy Edwards in
1985, displaying an extensive array of Motown artifacts,
photographs and other memorabilia. It also gives the
visitor an opportunity to stand in Studio A where their
favorite artist and groups recorded our much-loved music.
Also on display is the upper flat where Berry Gordy lived
with his wife and young child during the early years.

I was in my early years of high school when the Motown
sound hit the airwaves. I immediately fell in love with
the music like all of us. The lyrics, the beat, the sound,
I was intoxicated with this new music. I can remember
rushing home from school to watch American Bandstand and
then playing my records over and over. I memorized every
word of the songs, especially the Supremes, which at some
point in time, I actually thought I was Diana Ross. I can
remember going to the Michigan State Fair and watching
The Supremes perform in their very early days. I can
even remember what they wore, a two piece black and white
suit.

This music changed the course of history and I am so
proud that this former Detroiter, who had a vision,
started this life changing phenomena. Thank you,
Mr. Berry Gordy.

“Music is the universal language of the universe”
Henry Wadsworth Longfellow