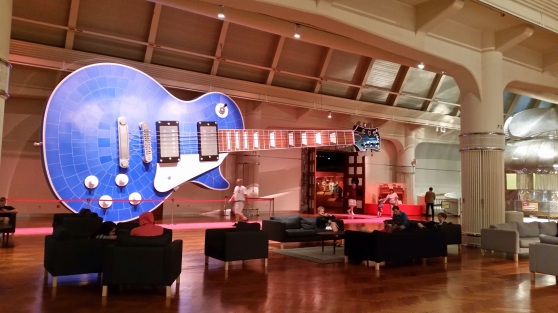 An enormous guitar stands outside The Women Who Rock exhibit.

I just recently had the opportunity to go see the traveling exhibit,
Women Who Rock, Vision, Passion and Power, at the Henry Ford
Museum in Dearborn, Michigan. It is presented by the Rock and Roll
Hall of Fame to honor women who have greatly contributed to the
world of Rock. It is a provocative exhibit, illustrating the important
rolls women have played in this strongly male dominated world
of Rock and Roll. The exhibit highlights the first, the best, the
celebrated, and even the lesser known women, who moved Rock
and Roll music and American culture forward. 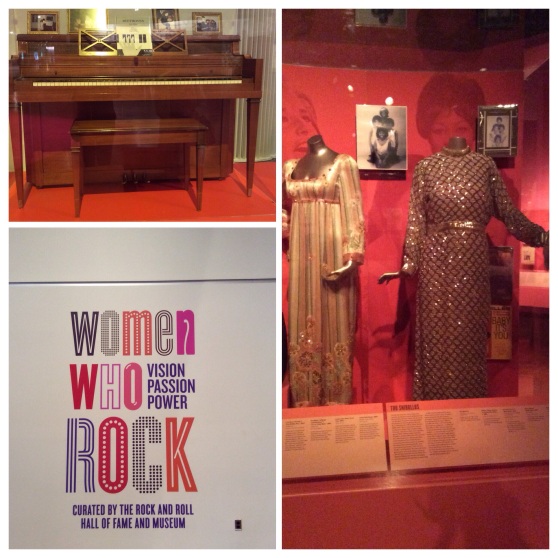 The exhibit walks the visitor through the days of Rock and Roll starting
in the 1950s with Billie Holiday, an American Jazz singer, whose life
was portrayed in the movie, Lady Sings the Blues. Her still famous
classics, “Too Marvelous for Words”, “My Man”, and “God Bless the
Child” amongst many others. Also it pays tribute to Bessie Smith,
an American Blues Singer, who was popular in the 20’s and 30’s.
These women, including Ella Fitzgerald, Josephine Baker, and Nina
Simone, amongst many others, paved the road to the female singers
of today. 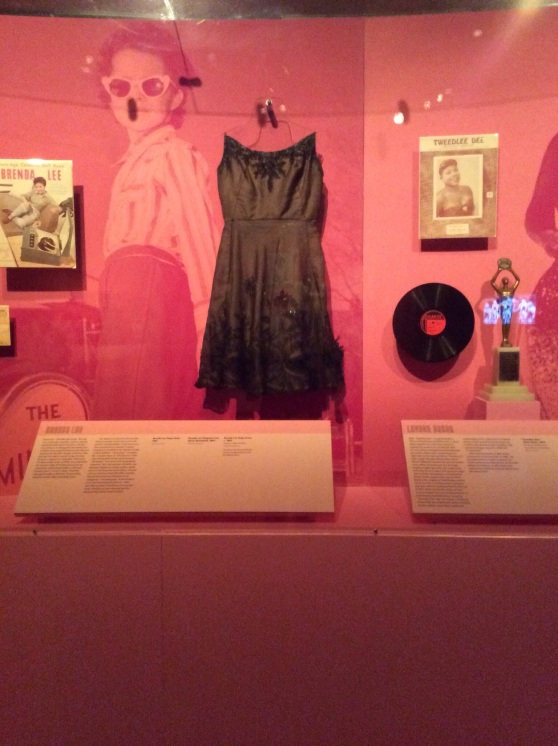 Brenda Lee’s dress she wore on the Ed Sullivan in 1962.
She was a 4ft 11in, powerhouse talent, who started in gospel at an
very early age, then sang her way to Country and Rock and Roll.
Her hits were many from, “All Alone Am I”, “Break It To Me Gently” and
“I’m Sorry”, amongst many classic Christmas songs including
“Rocking Around The Christmas Tree”.

Who can forget this outfit worn by Cher in 1973 for her Album Half-
Breed. Right: Siouxsie Sioux wore this fur hat and coat. “Streets on
Fire”. 1987. She was a British singer, popular in the 70’s and 80’s.
She sang with a group the Banshees.

Madonna from her “Blonde Ambition” tour in 1990. The gold
Bustier was designed by Paul Gauthier. Left: Madonna wore this
black tuxedo in the “Girlie Tour” in 1993. 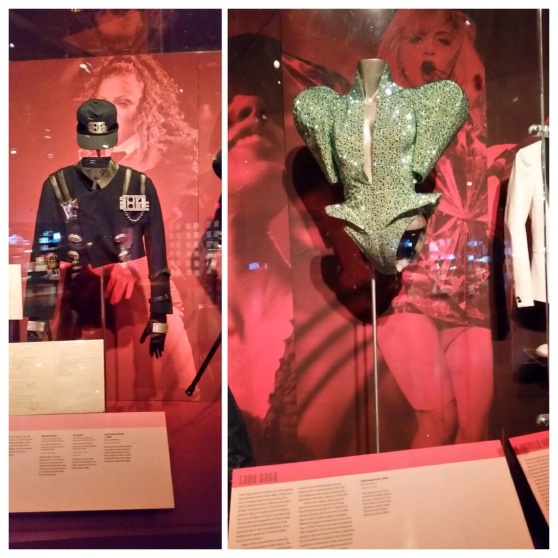 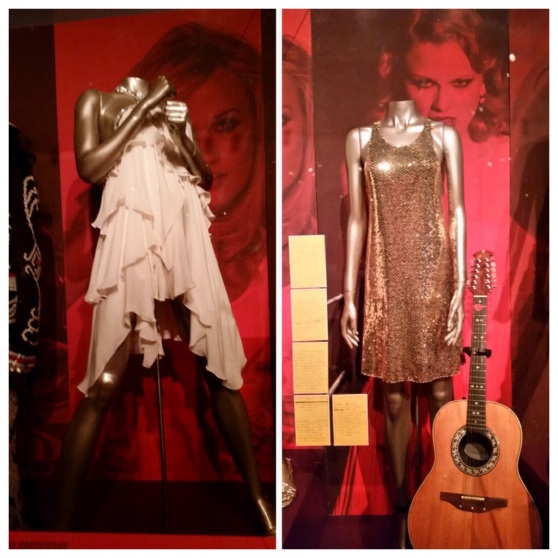 Left: Carrie Underwood wore this Roberto Cavalli white dress in
2009 at the Country Music Awards, winning “Entertainer of the Year”.
Right: Taylor Swift gold dress for Crossroads in 2009. Also this was
her first guitar her parent bought her when she was 12 years old.
The guitar cost $350.00.

The dress was worn by Aretha Franklin in 1974 at A Radio Music
Hall concert. The Hat was worn on January 20, 2009, for President
Obama’s inauguration. The hat was designed by Luke Song.

The exhibit has over 250 items from clothing, music sheets, props,
and many other interesting memorabilia for the Rock enthusiasts.
The exhibit will be shown from May 17, 2014 through August 17, 2014.
There were several more displays including, Loretta Lynn, Tina Turner,
The Ronettes, Donna Summer, and many more,
I would encourage anyone to see this well put together exhibit
celebrating, Women In Rock.

2 thoughts on “Women Who Rock Exhibit”