One place that was always high on my bucket list was Quebec City.
I had always seen pictures of Quebec and thought it looked like
the ideal European city that was the closest to Paris, without having
to spend a small fortune on an airline ticket, and yet was a train
ride from home. 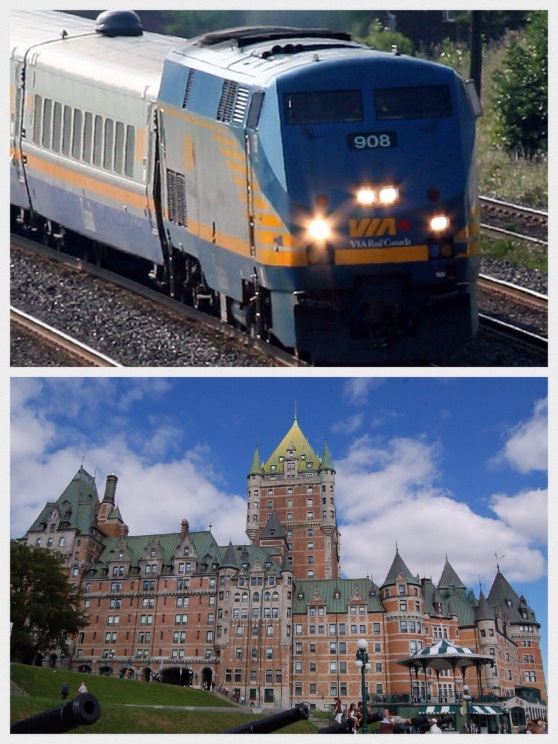 So a Fall trip was planned by train from Windsor, with a night in
Toronto, a train ride to Montreal for three nights and then on to
Quebec City for a four night stay at the fabulous Chateau Frontenac.
It is a grand hotel in Quebec City, Quebec, Canada, which is operated
by the Fairmont Hotels. In 1980, it was designated a National Historic
Site of Canada. 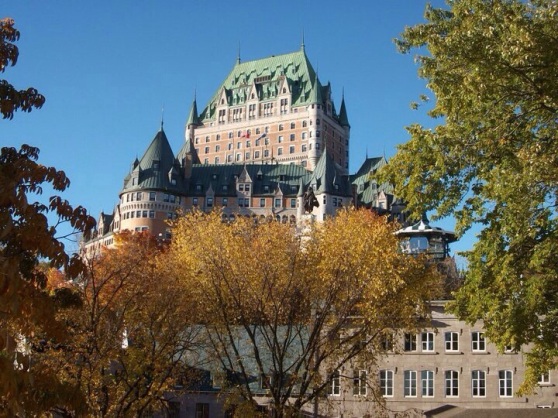 The hotel is generally considered the most photograph hotel in the
world, largely due to its position in the skyline of Quebec. Although
several of Quebec City’s buildings are taller, the landmark hotel is
perched atop a tall cape overlooking the Saint Lawrence River, with
a spectacular view for several miles. The hotel has 611 guest rooms
and suites with three restaurant to satisfy anyone’s palate. 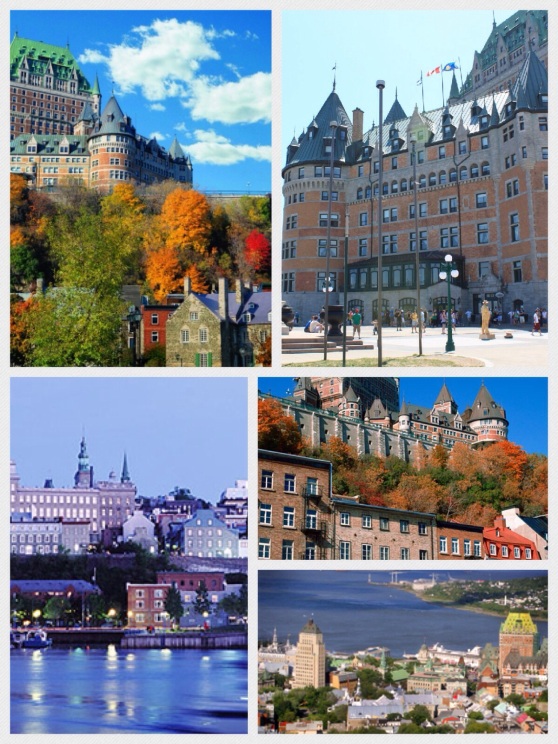 The hotel was opened in 1893 and has been host to many Presidents,
Winston Churchill and in 1944, the Chateau became the action center
for the Quebec Conferences of World War 11. In 1953, it was used
as a setting for an Alfred Hitchcock film, “Confess”, featuring Anne
Baxter and Montgomery Cliff. It is also featured as one of the main
locations in Rick Riordan’s book, “The Lost Hero”.
After checking into the hotel and dropping our bags off in our lovely
room, we hit the streets to see what the city had to offer, and wow,
we were not disappointed. 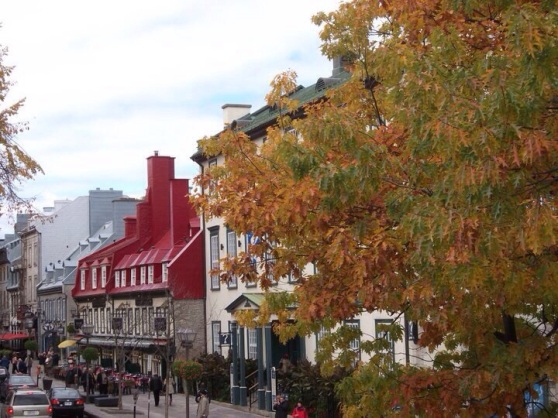 The crown jewel of French Canada, Quebec City, is one of North
America’s oldest and most magnificent settlements. It’s picturesque
old town is a living walking museum of narrow cobblestone streets,
17th and 18th century houses and soaring church spires, with the
splendid Chateau Frontenac towering above it. It’s like walking
around Europe with its classic bistros, sidewalk cafés, and manicured
squares. For an American it is France, without jet lag. 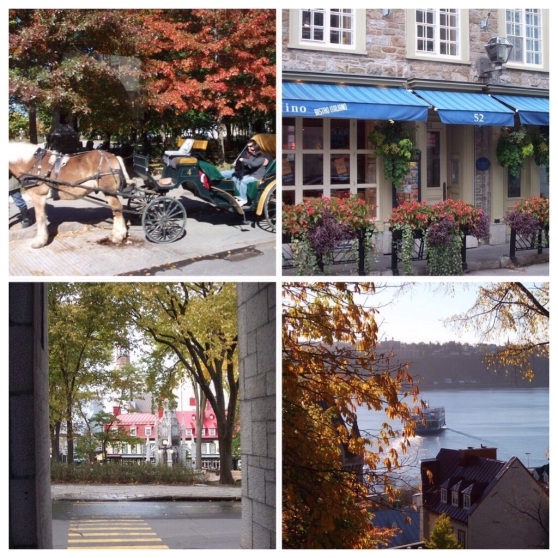 Walking the cobblestone streets of this city was a feast for the eyes.
The brilliant fall colors of the trees against the backdrop of the city
was unbelievable. The artist’s with their paintings on display in
the squares, the cafés busy with customers, the little streets with
many vendors selling a variety of their goods and a constant glimpse
of the St Lawrence River was perfection. Walking around upper
town to Montmorency Park with its fall foliage and Halloween
decorations was certainly one of the many highlights of this trip. 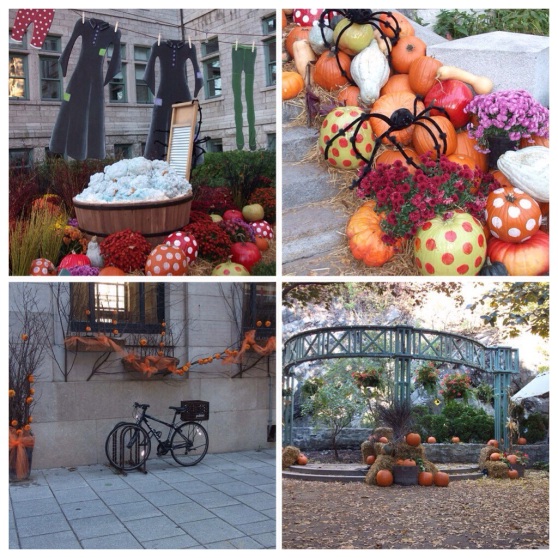 The city was certainly ready to celebrate the coming Halloween holiday.
Everywhere you turned, the city was beautifully decorated to celebrate
this day. I have seen many cities as this time of the year, but never
have been so impressed with how much work and thought went into
this holiday. This time of year is a great time to visit due to it is
considered off-season, crowds are sparse, and prices are lower. 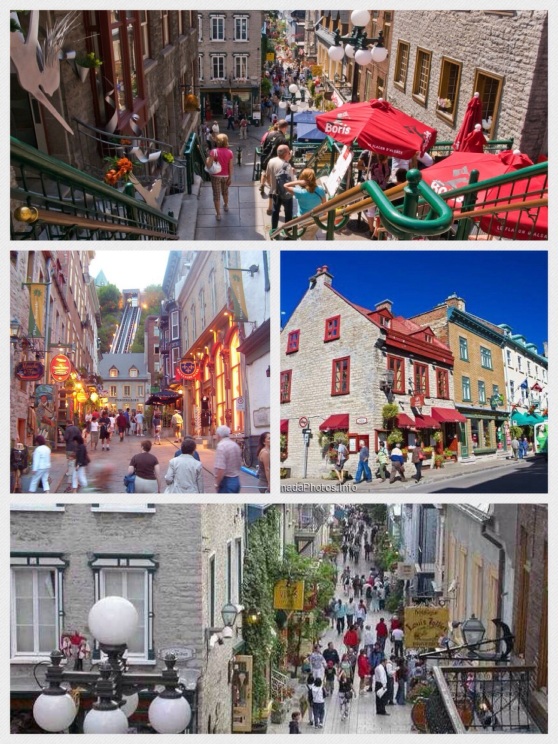 The main focus of a visit is Old Town, split between the Haute Ville
(upper town) perched above the St Lawrence River, and Basse Ville
(lower town) where Samuel de Champlain established the first of the
French settlements in 1608. The old town is packed with museums,
century old houses and cobblestone streets.
A funicular ascends the very very steep hill from lower old city to the
upper old city for $2.25 Canadian. A variety of boutiques, cafés,
bistros and beautiful old houses, dominate this area of Quartier
Petit-Champlain. Also Vieux-Quebec has the same to offer anytime
of the day. This is a great walking city. Every street, every corner
has something to offer everyone. Horse drawn carriages carry
visitors along the streets from upper town to lower town. 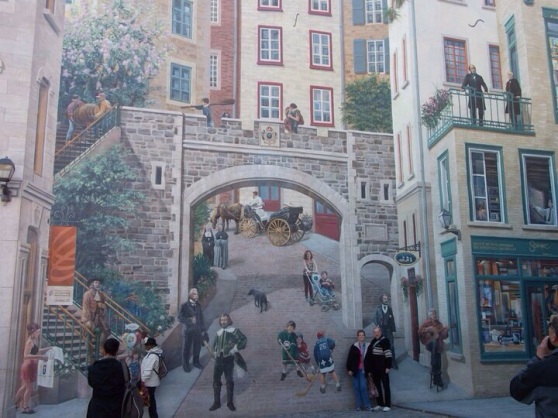 Visitors to old Quebec’s Place Royale can’t miss the immense Fresque
des Québécois. The mural recounts the story of Quebec City, placing
unique architecture and larger than life personalities. If you look
closely at the building’s windows you will see some 15 historic figures
and nearly a dozen of Quebec’s leading writers and artist. It is truly
a breathtaking scene. 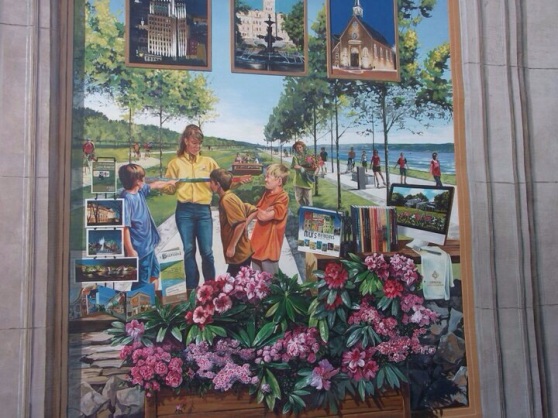 Another mural on the walls of the buildings. Notice the rich colors in
this modern-day times along the Terrasse Dufferin. 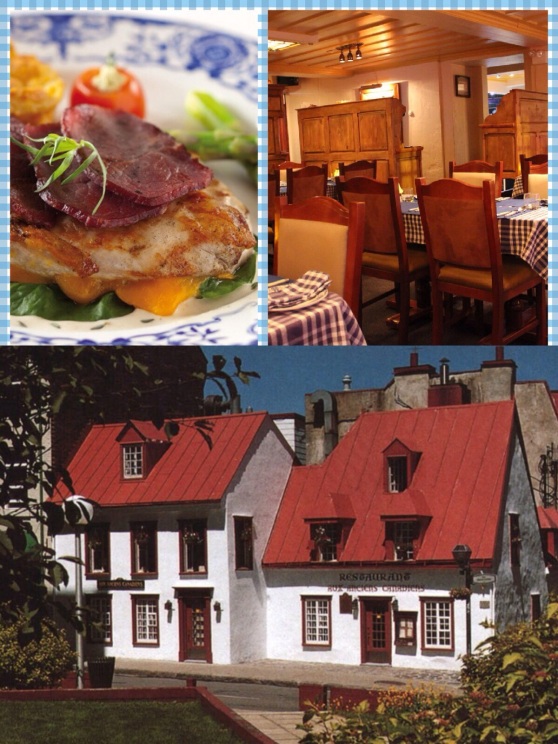 There are many great restaurants in Quebec but this was one of my
favorites, Aux Anciens Canadiens, housed in the historic Jacquet House,
which dates back to 1676. It specializes in robust country cooking
and typical Quebec specialities. It is quaint and homey and the food
is exceptionally good. We ate here two nights in a row. 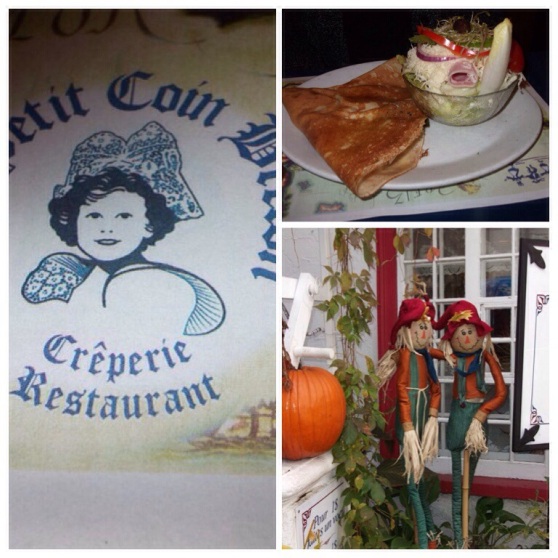 This was another good restaurant we ate at, Au Petit Coin Breton,
located in old Quebec. It was a creperie that was very unique.
The place was styled in an old fashion decor and the crepes were
light and yummy. It was perfect for a light dinner with, of course, a
dessert crepe, vanilla ice cream with maple butter. Yum. 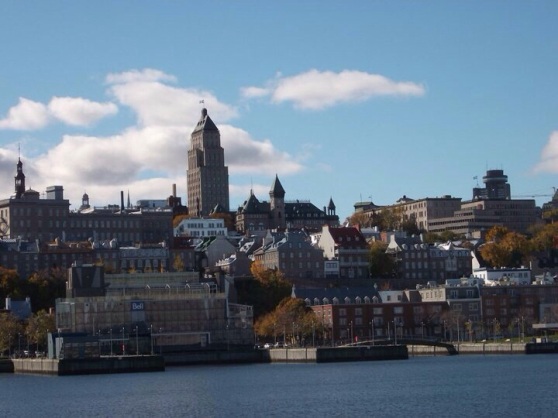 If you have the time take a city sightseeing tour. Because we were
there more than a couple of days, we decided one afternoon to take
a Viator city tour that took us through the highlights of the city.
We wanted to soak up the French charm of Old Quebec and be
enchanted by the old world atmosphere and stunning beauty of
sites such as Place Royal, the Plains of Abraham and Place d’Armes.
During the two-hour tour, you will be shown numerous historical
treasures on the banks of the St Lawrence River, giving you a great
overview of the city. 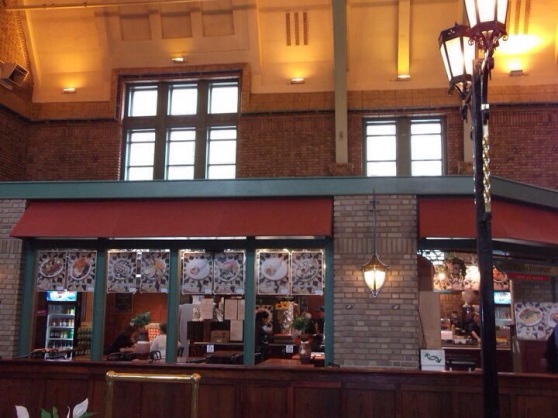 The adorable small restaurant in the train station in Quebec City.

After a wonderful four nights at the Chateau Frontenac Hotel and
walking the cobblestone streets, in and out of little churches, and
views to die for, I was sorry to leave this city. It was everything I
had hoped it would be and more. I know I will return soon, and
wouldn’t Christmas in Quebec be perfect.