I don’t know about you, but I am a big fan of period films or mini series.
One of my favorite is Downton Abbey. I have watched every episode
for the last four seasons and am patiently waiting for season five to
start in January of 2015 in the United States.
That is why I just returned from a trip to Delaware, just outside of Wilmington, in the beautiful Brandywine Valley, where I was lucky enough
to see a very special costume exhibit on the fashions of Downton Abbey,
at the Winterthur Mansion and Museum, former home of Henry DuPont.

This exhibit includes 40 outfits on display and is the only U.S. exhibit
to feature costumes from the renowned series, which is a Golden Globe
Award winner for Best Miniseries and 7 Emmy Awards.
So let’s step into the world of Downton Abbey, upstairs and downstairs,
and view some of the fashions worn by our favorite characters in this
highly successful series. 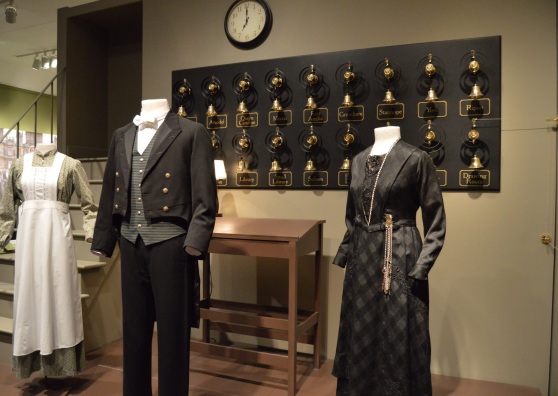 Gwen, a downstairs maid, would wear this as a day uniform.
Thomas, a footman and also a underbutler, wears this polished black
uniform with the gold buttons.
Mrs Hudges, deceptively simple uniform has lovely elements and
embellishments that one would imagine on a cocktail dress.

Mrs Patmore and Daisy would work together in the kitchen to perhaps
make a mousse for the family.

Part of the exhibit was looking at the mauve and violet colors of
“light mourning” clothes that are worn when someone passes on.
Cora and Mary would wear these dresses at the funeral of the beloved
Sybil. 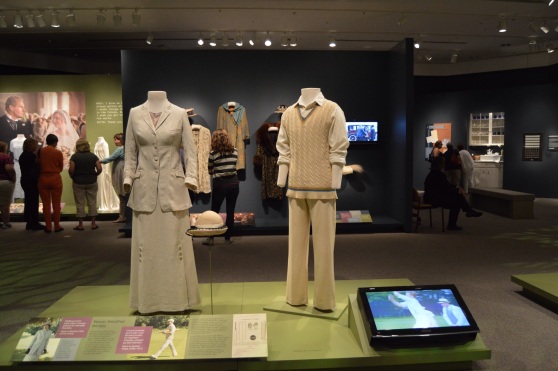 Suit worn by Lady Mary. Matthew would wear this classic sweater and
pants to play Cricket.

Remember the episode when Sybil would break through the fashion
barriers and wear this scandalous Blue Harmen Pant Dress. 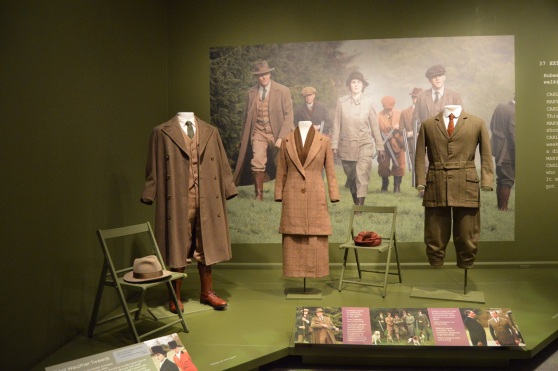 O’Brien and Cora in the bedroom having a conversation. Hmmm, could
there be some scheming going on.

The wedding dress that Edith would wear when she was jilted at the
alter. 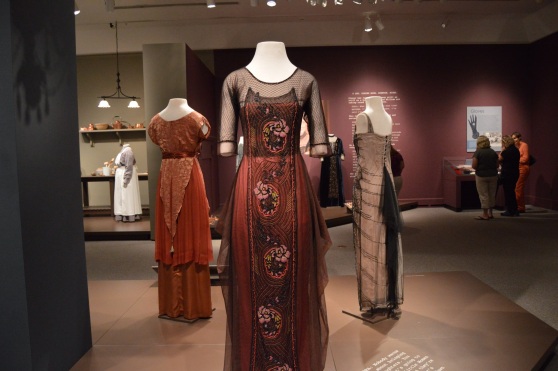 This beautiful embellished cocktail dress, worn by Cora for dinner.

This display was probably my favorite. The coats of Downton Abbey.

The gloves of Downton Abbey. The ladies would wear these every
night for dinner and once seated would remove the gloves very carefully
and lay across their laps. 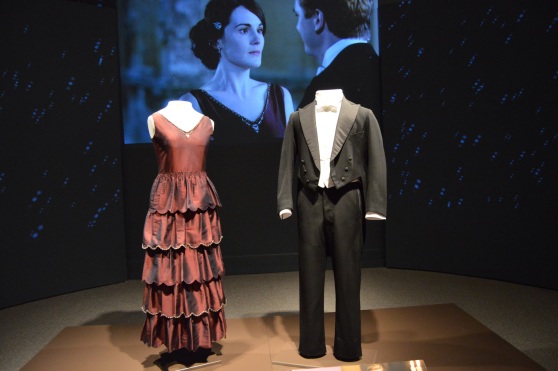 This exhibit was outstanding. It far exceeded my expectations and would
please any fan of this show. If anything, you would only want to see more.
The clothes were exquisite and the presentation perfection.
In talking with the Winterthur guides, we were told that this would be the
only time this exhibit would be shown in the United States. What an honor
and privilege this museum has been awarded to present the only exhibit
of its kind. 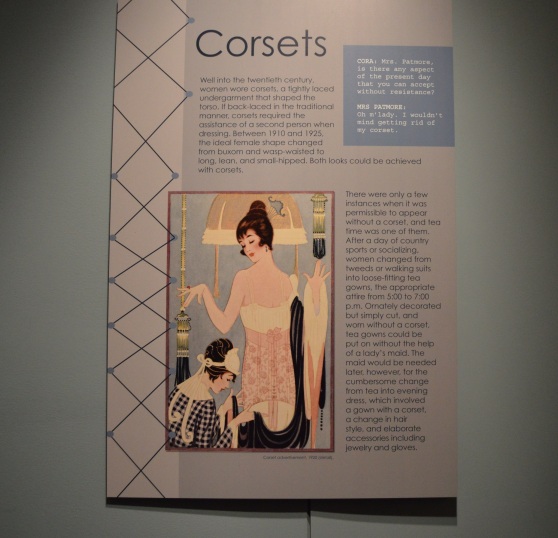 The Downton Abbey exhibit is pure genius. Winterthur is the perfect
location, as Winterthur does everything with great historical accuracy
and a great sense of style and hospitality. The guides were very well
informed on the exhibit and seemed to be just as excited as us visitors.
The exhibit runs through January 4, 2015 and any Downton Abbey fan
would know it is well worth a visit.