If you live in Michigan then you certainly have visited Mackinaw City
a time or two. It is said by AAA it is the most visited city in Michigan.
The census in 2010 states approximately 806 residents reside in this
city, except in the summer, when the population surges with workers
from all over who labor in hotels, shops, restaurants, and other
seasonal facilities.

Mackinaw City is the gateway to Northern Michigan and Mackinaw
Island by Ferries leaving from the city.
It is at the northern point of Michigan’s Lower And Upper Peninsula,
along the southern shore of the Straits of Mackinaw.
This 8,614 ft. Bridge connects the lower part of Michigan to the upper
part, or as we call it, the Upper Peninsula. In looking at the bridge,
Lake Michigan is on one side and Lake Huron on the other side 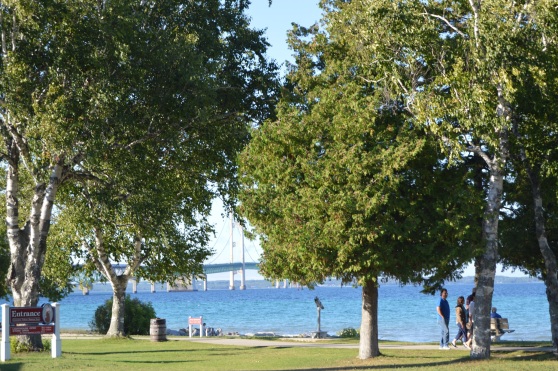 I loved sitting on a bench in this park and looking at the bridge, with
Mackinaw Island in the far distance. 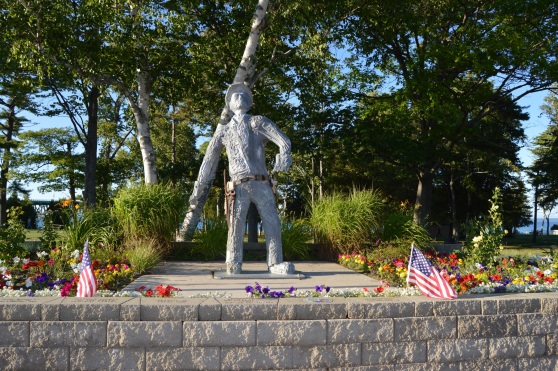 This Statue stands near the bridge entrance in honor of the five laborers
who lost their life in the building of the bridge. They would come from
all over the United States, including Canada, to work on the building of
this mighty Mac that some thought was totally impossible.

Mackinaw City is lined with hotel after hotel. My choice would be the
Brigadoon Bed and Breakfast of Mackinaw City, which I just wrote about.
There are many fine hotels and motels that line the streets of this city
that are very nice. From what I have seen, the choices are plentiful and
pretty reasonable.

Lots of great stores to lure us tourists in. Probably any kind of store you
can think of is here. There were a couple of very nice ladies fashion
shops, which I must say, I did indulge.

Look who came into Joanne’s Fudge store, The Village People. Not
really them, but these guys were a hoot. Just walking around town
entertaining us tourists.

This would be them the next day doing a form of yoga to music in
an area where they could entertain us again.

Lots of great restaurants in the city, we would choose to eat at The
Historic Depot restaurant, which was very good. I had a great Whitefish
seasoned and done to perfection. 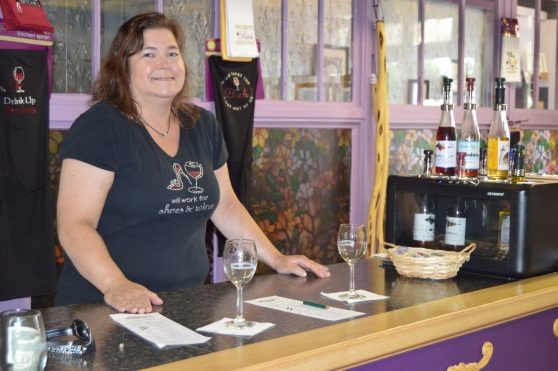 Let’s not forget that Michigan has some great Wineries throughout the
state. We would go to the Garden Bay Winery right in Mackinaw City,
actually right across the street from where we were staying. We tasted
about 6 different wines. I would end up buying a bottle of Old Mack
Currant, a Michigan grape wine with red currant concentrated added. 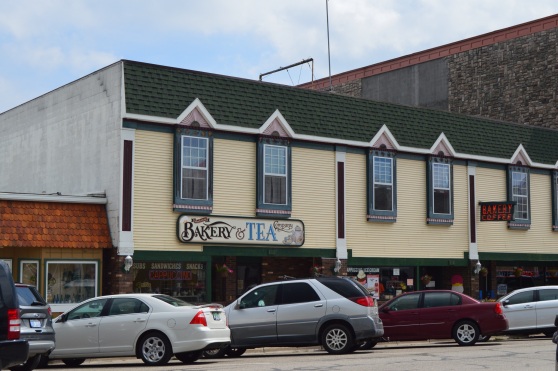 Mackinaw City is a great getaway, whether it’s for a few days or a stepping
stone to Mackinaw Island or the Upper Peninsula. It has great and
clean accommodations and is family orientated. I will always try to
get here once a year, if possible. Northern Michigan is beautiful and
and a trip through this part of the state, is always a good idea.